Oh, where do I start?
I've been so upset, I've given myself some time to calm down before attempting this post.
Our lovely little cabin was vandalized!
Was it a bear or a human? 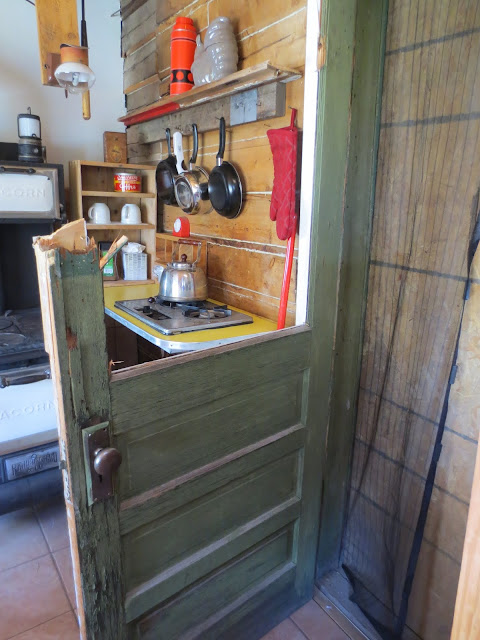 At first we thought it was the bear that has been visiting our neighbors.
He's a handsome fellow isn't he? 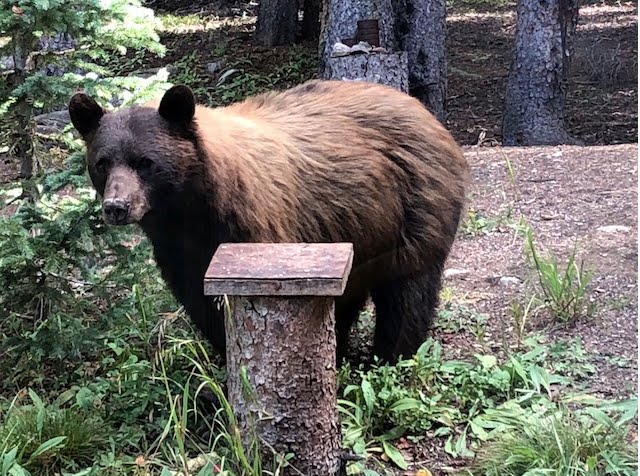 But the more we examined the evidence, the more we began to think it was a vandal,
probably looking for money or valuables. Not going to find either in this cabin.

A thoughtful neighbor noticed our back door had been broken into in our absence and
quickly boarded it up for us, then called us to let us know. Thank God for nice neighbors! 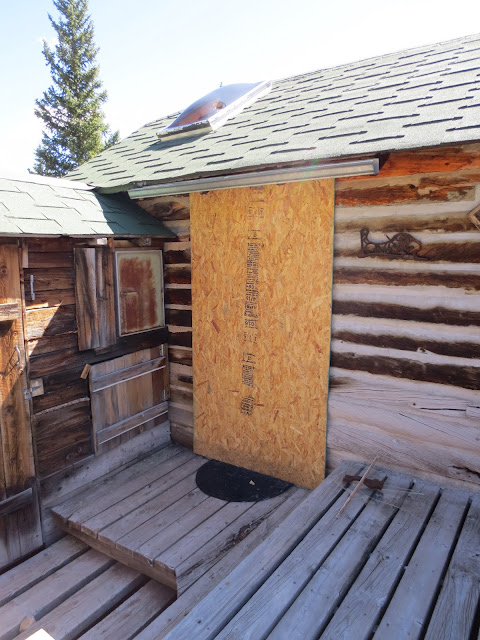 I was just heartbroken when I saw the huge mess the vandal had made.
It was much worse than I was expecting.

Here's the back door, smashed to smithereens.
It sure looked like a hungry bear was the guilty party.
But we didn't have any food in the cabin. 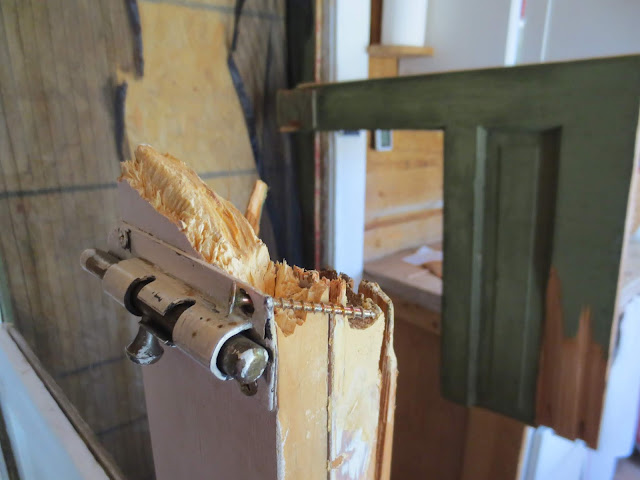 Those of you who have experienced a burglary must know how I felt. I wanted to cry.
We'd been working so hard to make this little cabin our own
and now it was a total mess. I was so angry. 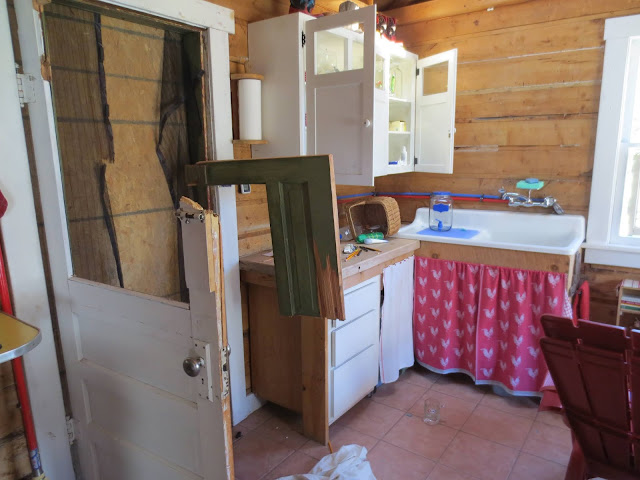 The bedroom was trashed but the only thing broken was an oil lamp globe. Everything was tossed about, drawers pulled out and dumped upside down as if someone was looking for money.
It seemed unlikely a bear would do this. 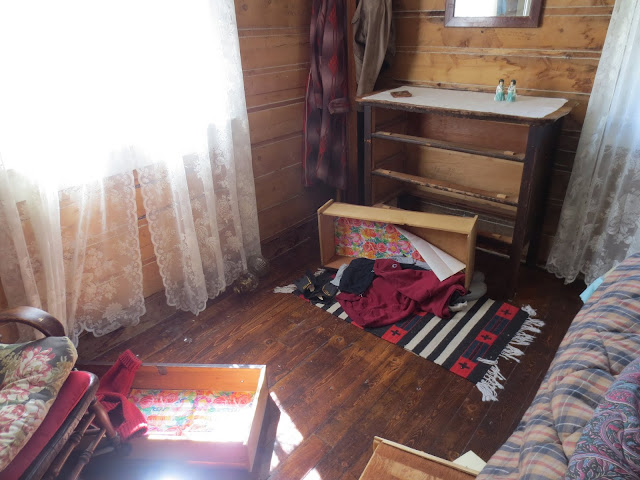 Even a latched tool box had been opened and dumped (not easy to do without a thumb!). 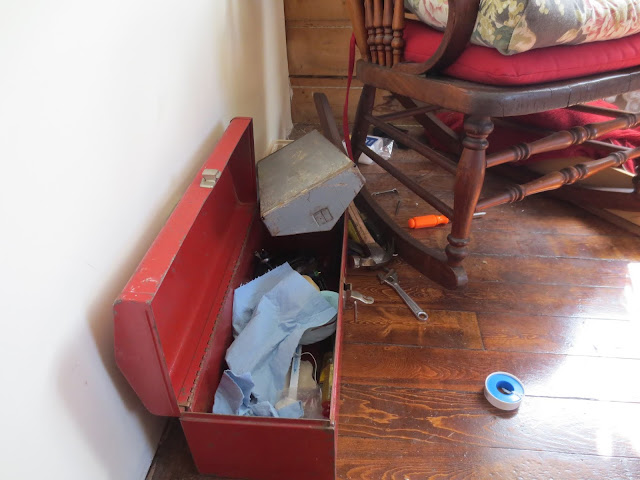 Outside we found a glass wine bottle that had been smashed against a tree and another tool box dumped. Looking more and more like vandalism or an attempted burglary. 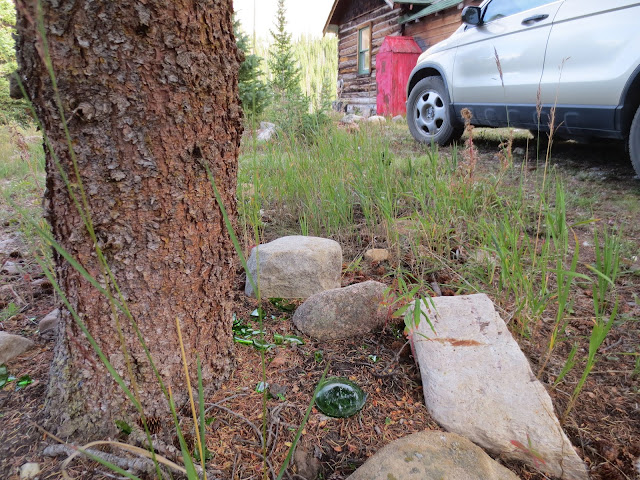 The Parks and Wildlife guy came out and checked for signs of a bear but didn't find any
(claw marks, hair, poo, etc.). We then contacted the sheriff and reported the incident.

I set about cleaning up the mess, sweeping up broken glass everywhere, making the bed,
putting drawers and cabinets back together.
As I worked I noticed the damage was just superficial, nothing too serious.
It could have been much worse but I still felt creepy.
Ironically, the only thing missing was a canister of bear spray!

Since this happened, we've heard from another neighbor who found their door window broken
by a rock. We also discovered a baseball-sized rock by our back door.

I'm still working through my anger and sadness.
For several days, I was so discouraged I didn't even want to go back to the cabin.
But now I'm ready to return, replace our broken door and enjoy the mountains
as the leaves begin to change and the high country welcomes Fall.

I won't be staying overnight there alone again though. 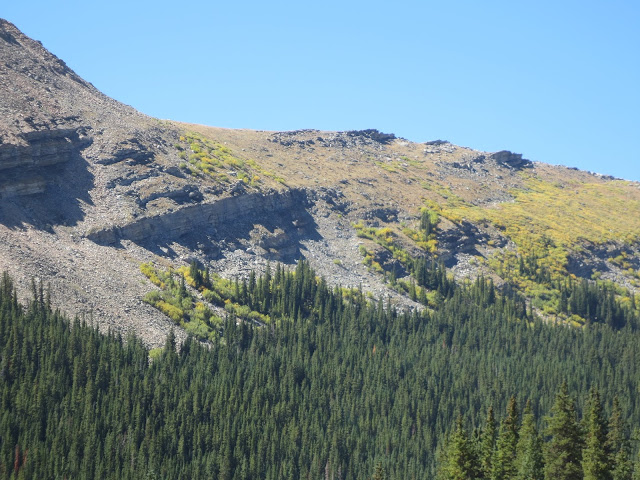 ***
I'd love for you to follow me by email.
Just subscribe (it's Free) in the upper right column of this page.
You can also follow my Pinterest boards to see all my favorite photos.
Thank you!!!


Posted by Pat @ bringingfrenchcountryhome at 9:17 AM