I've been watching for two old sconces for my bathroom for a long time.
They were all too new, too gaudy, too expensive.
But then I found just what I was looking for at an estate sale.

I wanted something with turn-of-the-century character and style
but small enough to work in my tiny bathroom.
So, take a look . . . aren't these just gorgeous? 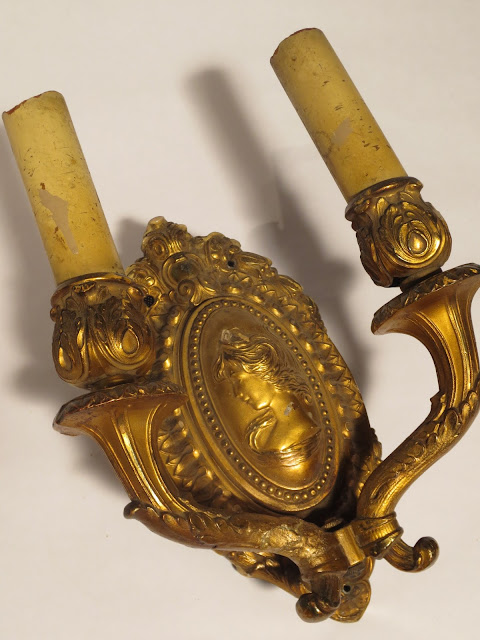 They are in need of re-wiring and re-connecting and replacing bits and pieces,
but, oh, they captured my heart at first glance.
And only $20 for the pair! 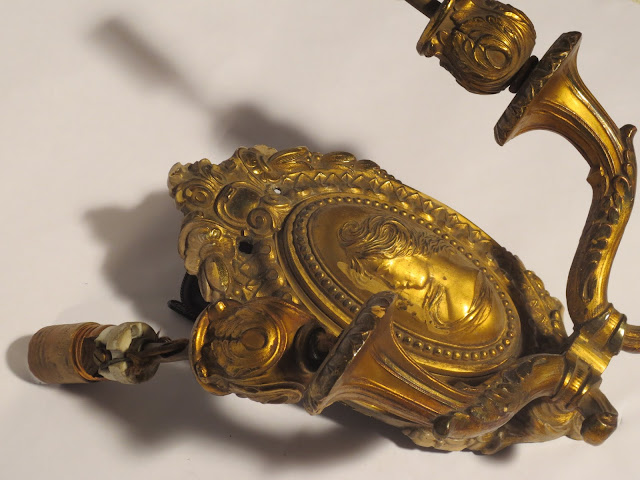 The thing that really caught my eye was the charming profile of the woman in the center.
So delicate and pretty. 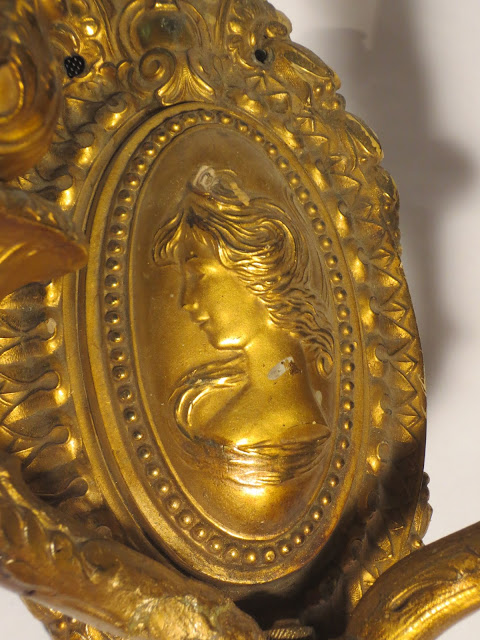 The jolly man in the plaid shirt who sold them to me told me they were "very very old."
He said "she" wouldn't have let him sell them.
I assume he was referring to his wife who had probably passed.

Then, he proudly showed me his gazillion bird houses and feeders.
I so enjoyed talking with this elderly man with the twinkle in his eye.
It's one of the reasons I love these sales so much.

Here you can see where someone slopped paint along the edges. 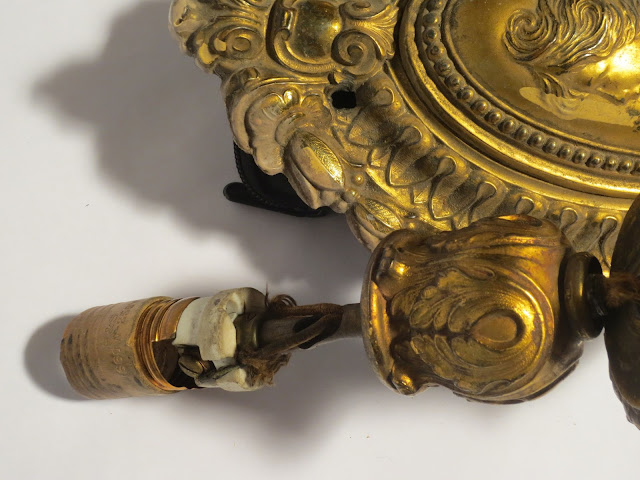 I'm definitely no expert but I think these sconces might have
a little Venetian or French-inspired influence. At least, I hope so.
I'm guessing they're from the early 20th century, judging from the design and the old wiring.
Ron plans to rewire the sconces and tighten up the creaky joints
before hanging them in the bathroom.

PLAN B
Well my friends, things don't always turn out the way you think they're going to.
When Ron got into the project, he discovered the arms of the sconces had been badly broken, probably dropped, and soldered back together.
This effectively closed off the channels for the wiring. Permanently.
Sometimes Humpty Dumpty just can't be put back together again.

So, on to Plan B.
Ron squeezed JB Weld into the wobbly joints. When this epoxy is dry, it's rock solid.
He says it's the next best thing to actual welding. It actually glues metal together. 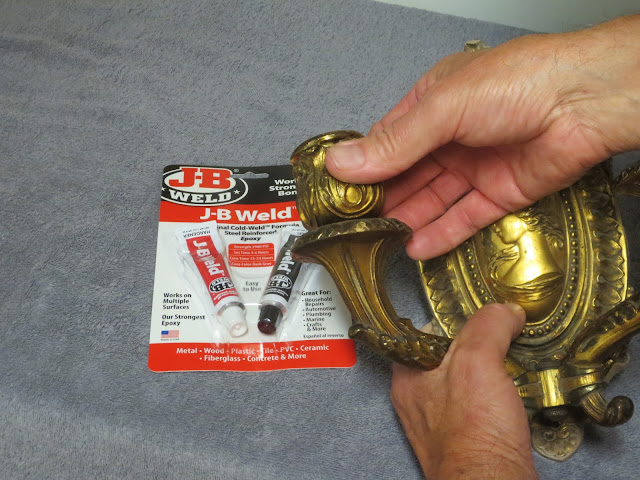 Removing old paint splatters with Zip Strip,
then toning down the shine with matte medium tidied them up nicely.
A big thank you to Ron for all his hard work restoring these sconces.
Like most renovations, it took a lot longer than we'd thought. 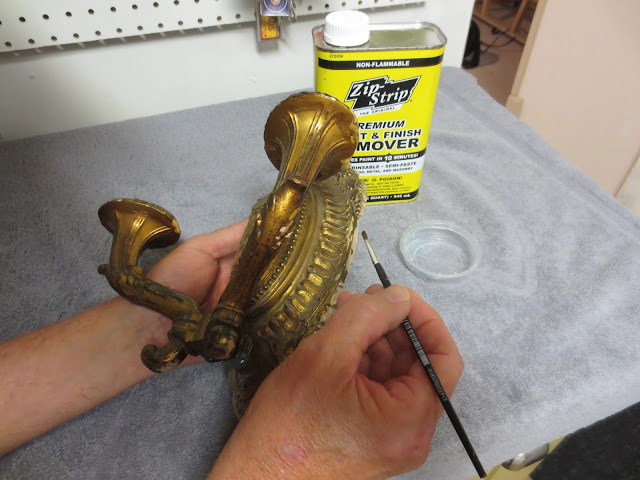 Once they were put back together, we mounted them on the living room fireplace wall . . . 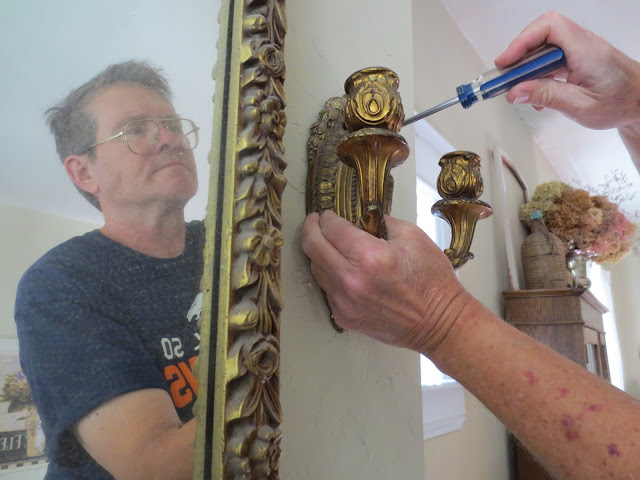 and put battery-operated candles in them. 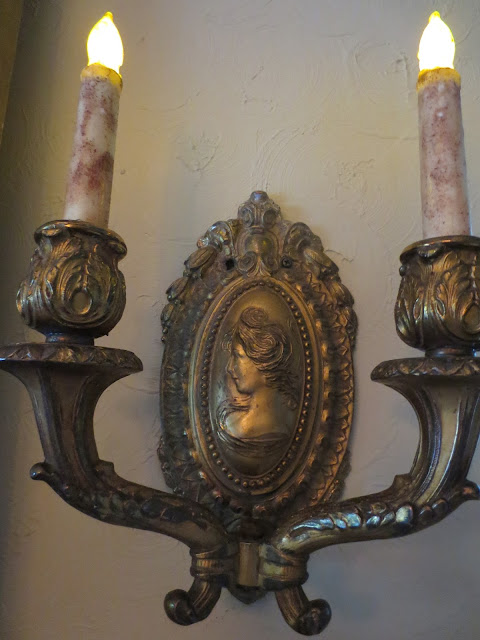 They may not be the bathroom sconces I thought they'd be
but it's good to be flexible when dealing with old things that don't cooperate, don't you think?
Hey, I'm talking about the sconces here people! 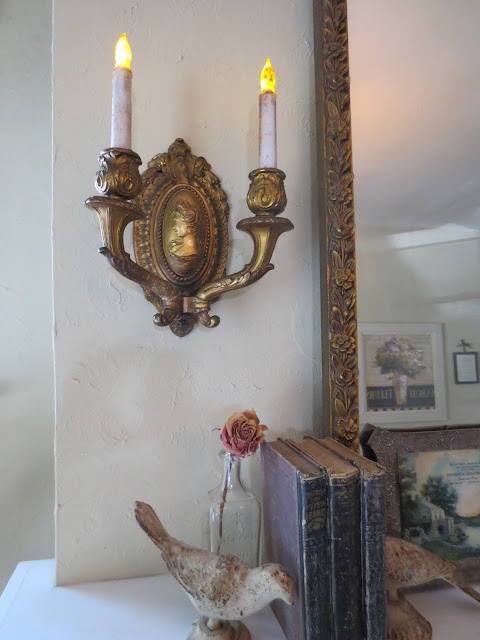 And here's the final result.
I'm still totally in love with them, maybe even more. 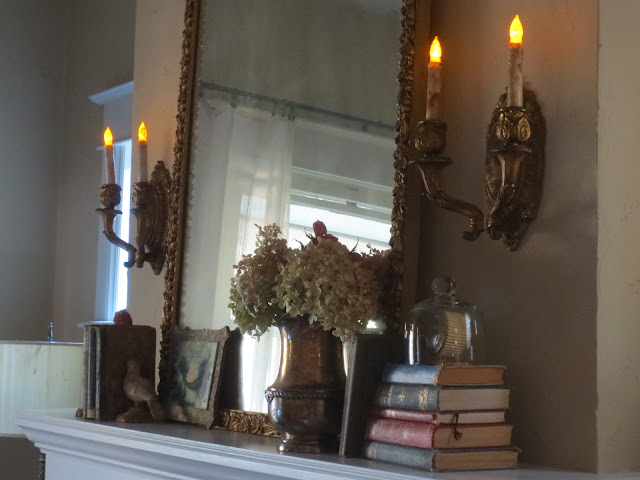 And they look right at home in my old house. 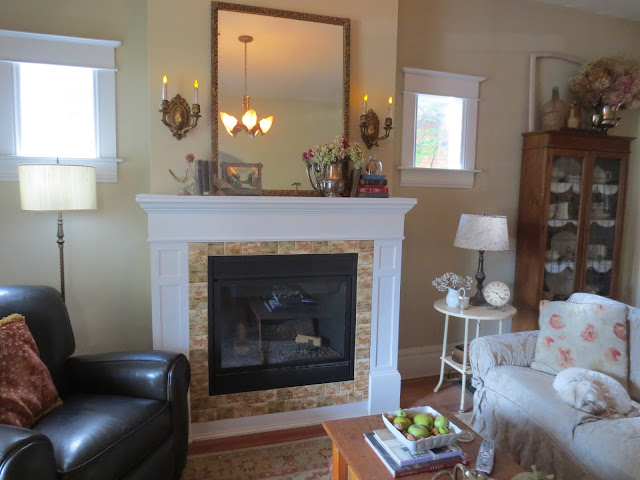 I have searched on-line but haven't been able to find anything similar to these
to learn more about them.
They're quite heavy, probably cast iron.
If you know anything about this type of sconce, I would love to hear from you.

Posted by Pat @ bringingfrenchcountryhome at 1:45 PM